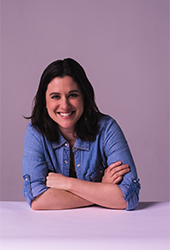 GITA BEZARD is a playwright, director, performer and theatre maker, living between Melbourne and Perth.

In 2016 she was nominated for The Victorian Premier’s Award for her play Girl Shut Your Mouth, which premiered at Black Swan State Theatre Company. She has twice won the Black Swan Emerging Writers Award. She has been commissioned in 2017 by Western Australian Academy of Performing Arts, in 2019 and 2015 by Curtin University and in 2013 by Perth Theatre Company to adapt two short plays by Eugene Ionesco.

In 2012 she received a DCA Fellowship to do professional development in the UK and USA.

For The Last Great Hunt: Perpetual Wake, Le Nor (Perth Festival), Stay With Us, Improvement Club, The Talk, The Advisors, Price Tag, Monroe and Associates, All That Glitters, Minnie and Mona Play Dead.