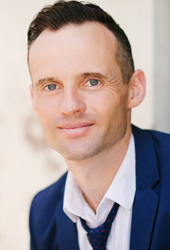 Tommy Murphy is an award-winning playwright with recent productions in New York, San Francisco, Indiana, Auckland, Melbourne and Sydney. He is the only playwright to win the NSW Premier's Award, a prestigious national writing prize, in successive years. In 2006, he was the youngest recipient of the award with Strangers in Between. This play toured nationally in 2008 and is published by Currency Press in a joint volume with Holding the Man, which had five Australian encore seasons after breaking box office records in Sydney.

Tommy is a graduate of the National Institute of Dramatic Art (Director's Course) and a former writer in residence at Griffin Theatre Company. His plays include an adaptation of Marlowe’s Massacre at Paris (ATYP), Troy’s House (TRS in Sydney and La Mama in Melbourne) and Precipice (Young People’s Theatre).