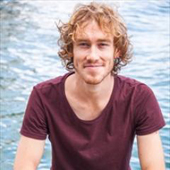 Charlie Falkner is a Sydney-based actor and writer currently managed by Smith and Jones Management. After graduating from Newtown High School of the Performing Arts, Charlie has been involved in a wide-ranging assortment of independent theatre companies and shows. He has also featured in a number of film projects culminating in the 2013 feature film Wrath.

In 2016, Charlie signed on as a co-artistic director of JackRabbit Theatre company, and has subsequently written, produced and acted in a number of their productions.