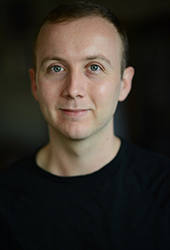 Lewis Treston is an award-winning playwright based in Queensland. In 2019 his new comedy Meat Eaters, which was developed at the Sydney Theatre Company, premiered at NIDA and Follow Me Home, commissioned by ATYP, premiered at Riverside Theatres. Also in 2019 he has had two shorts works commissioned and produced: Ghost Hunter produced by White Rabbit Theatre Company and Condo Osaka produced by Periscope Productions. In 2017 is short play The Arcade was presented as a part of Intersection at ATYP and published by Currency Press. His 2016 Patrick White Award winning comedy Hot Tub was commissioned by ATYP as a part of the company's writer in residence program and was subsequently presented as a moved reading at La Boite's HWY Festival. In 2015 his play Reagan Kelly was produced by NIDA as a graduation piece and was subsequently shortlisted for Belvoir’s Philip Parsons Fellowship and has since been performed at Metro Arts in Brisbane and Lion & Unicorn Theatre in London. Other plays and screenplays include Pre-Drinks, Anita Elizabeth Jensen, Fireworks and Blood & Tinsel. He is a graduate from both NIDA and QUT.