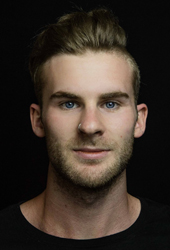 Andy is a Tasmanian born and bred writer, actor and theatre-maker residing in Hobart, Tasmania. His first original piece, DRAGGED, won a Tasmanian Theatre Award (The Errols) in 2017 for Emerging Artist/Writer and was first performed at The Annexe Theatre in Launceston, moments after graduation from The University of Tasmania.