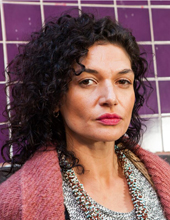 Kamarra Bell-Wykes is a Yagera and Butchulla woman from South-East Queensland as well as descending from South Sea Islander, English, Welsh and Polish blood lines. She is the newly appointed Creative Director of ILBIJERRI Theatre Company working alongside Artistic Director Rachael Maza.

Kamarra started her career as a performer and playwright over 15 years ago, and received the prestigious Greenroom Gerda Nicholson Emerging Actress Award in 2003 for her role of Ann in Stolen. Kamarra has written a number of award winning health-education shows including Chopped Liver, Body Armor and North West of Nowhere, commissioned specifically to educate around issues as such as intravenous drug use, body modification and Hepatitis C. These plays were written specifically for prison, school and Aboriginal community audiences, to empower the de-marginalized and inform the mainstream. Chopped Liver and Body Armour and North West of Nowhere combined toured over 10 years and were seen by more than 50 000 people across Australia. Her other works Shrunken Iris, Mothers Tongue and Crying Shame were analytical examinations of spiritual fracturing and how it manifests in physical ways. Kamarra is currently working on the 4th Hep C instalment as well as developing her dramaturgical skills.