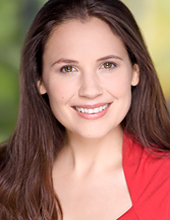 Nadia is a writer and playwright. She was the recipient of Exit Theatre’s 2014 scriptwriting award with her first full-length play The Colour of Fire based on the stories of survivors of the Victorian Black Saturday bushfires. This later culminated in script development in 2015 and was staged and directed by John Wood in 2017.

She comes from a theatre background, having studied acting at The Victorian College of the Arts, National Theatre Drama School and Flinders University. She has a passion for various forms of writing, including food writing for her blog The Road Not Taken and has also published an anthology of poetry, Winter’s Last Kiss.

Nadia has also written a verbatim theatre script, Random Acts of Kindness, which delves into the world of animal activism. She has recently completed on her third play The Mermaid's Tale.

Nadia lives in Melbourne but grew up in Murray Bridge, South Australia.