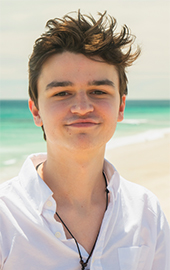 Jack Cummins wrote Clanstow whilst in Year Ten at Saint Ignatius College in Adelaide. The script won first prize for the State Theatre Company and Flinders University's Young Playwrights Award. After workshopping the script with professional dramaturgs, Cummins set up his own amateur theatre group, Glassroom Theatre Company, to stage Clanstow during the 2018 Adelaide Fringe. He was both the director and producer of the production and also played the role of Nick Waters, all whilst undertaking Year Twelve. He later presented Blackrock by Nick Enright in the 2019 Adelaide Fringe and is currently studying drama at Flinders University.