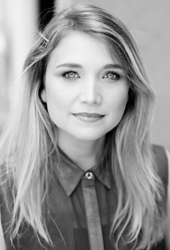 Katy is a playwright and writer. A graduate of the Victorian College of the Arts (University of Melbourne) she received a Master of Writing for Performance in 2012. She is an AWGIE winner (Best Children’s Theatre for Reasons to Stay Inside), recipient of the Melbourne Fringe Award for Best Emerging Writer (These are the isolate) and two-time nominee for a Victorian Green Room award for new writing (Spencer and A Prudent Man). Other works include Dropped (published by Playlab), nest (Vault Festival, London), Paper Doll (Old Fitz, Sydney and The Blue Room, Perth Fringe) and K (a work in progress for Melbourne Theatre Company’s Cybec Electric readings). She has been shortlisted for both the Martin Lysicrates Prize (2018) and Lysicrates Prize (2019). Her fiction has received the Rachel Furnai Prize for Literature (Lip Magazine) and Overland Magazine’s Neilma Sidney Short Story Prize, and has appeared in Overland Magazine and Best Summer Stories anthology (Black Inc. Books). Her debut young adult novel, Everywhere Everything Everyone, will be published by Hardie Grant Egmont in 2019. She is a proud member of the Australian Writers' Guild.