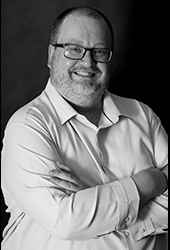 John, being unable to find scripts that quite suited what he wanted to direct, began writing one act plays in 2012 for Pop Culture Theatre inc, the theatre company he cofounded, to be performed on the Victorian Drama Leagues one act play festival circuit. John, with no formal training in writing, doesn’t consider himself to be a writer or a playwright, but rather a guy who is trying to make sense of stuff through theatre.

To date he has written or co-written, 9 award winning one act plays. These works range from large cast farce/comedies to small cast dramas. His work is designed in most cases to be minimalistic to make it easy to take on the road at the festivals. He is renowned for productions that push the actors to their limits, either physically, mentally or both and is always striving to find the answer to why? His plays include include (with Michael Olsen), Persistent Offenders, Bethany, Locked, Imagination (youth play), The Sack (youth play), Forthlin Road, Hopping the Bags, (With Aron Toman) A One Act Passion and (Solo) The Peace of Angels.

John’s works have won a total 65 awards and garnered a further 55 nominations. In 2018 he had two of his 10-minute works selected for festivals – It started with a thwack, (Runner up 10-minute quickies), and Advice, (Finalist Arkfest).

John believes that theatre is a living being and encourages each company to adapt his works to their needs and to not treat the script as a sacred tome that must be performed exactly as is, as long as you can explain fully why and run those changes past him.