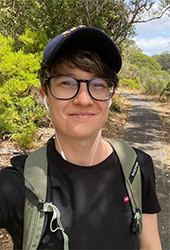 Liz Newell is a playwright and theatre producer based in Perth. In 2014 she was a member of Black Swan State Theatre Company’s Emerging Writers Group. In 2016 she founded Maiden Voyage Theatre Company to champion equality in theatre and storytelling, and produced her play Belated at The Blue Room Theatre. In 2016 Playwriting Australia supported the development of her work Alone Outside which premiered in 2017 as part of The Blue Room Theatre Summer Nights program of FRINGE WORLD Festival, and was a finalist for the Martin Sims Award for Best New WA Work. 2017 also saw the debut of Liz’s play Toast, which won the 2017 Blue Room Theatre Award for Best Production, and for Best Performance (Amy Mathews). Toast was also a finalist for the 2017 Performing Arts WA Awards for Best New Work, and Best Independent Production. In 2018 Alone Outside premiered in Melbourne as part of the Melbourne Fringe program, produced by award-winning new writing theatre company Lab Kelpie. Liz has worked in various capacities for Perth Festival, FRINGE WORLD Festival, WA Youth Theatre Company, WAAPA and more. Most recently she was a Producer and Tour Manager for The Last Great Hunt, and is proud to currently be working for Performing Arts Connections Australia. In 2021 she is a Black Swan State Theatre Company Associate Writer and producing three new Australian works.