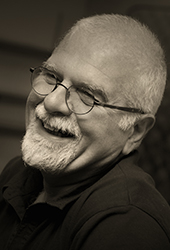 James’ previous writing credits include the stage play The Night After the Day Before (Ensemble Studios) and two ABC telemovies Thank You Jack, and An Electric Day. He also wrote and directed the feature film Saturday Night, which when screened on SBS, was selected as “Film of the Week” by the SMH and then invited to the Cinequest Film Festival in San Jose, USA. James wrote and directed many productions for Short and Sweet and was a Gala finalist in 2010 and 2011. He also wrote and directed the successful Viagra Monologues and The New Deal for the Sydney Fringe Festival. In 2014 he produced his play Brother Daniel at the Tap Gallery. In 2018 his work featured in the Raw Bites Road-Trip Monologues show in Los Angeles.
The two plays he co-wrote and produced with Roger Vickery – A Nest of Skunks and Mum, Me and the I.E.D – had very successful Sydney seasons at the Depot Theatre in 2016 and 2018, respectively, earning glowing reviews and very gratifying box office results.