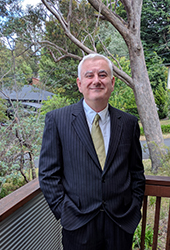 With a BA in Theatre Studies from UNSW, Julian Leatherdale’s work includes four comedy cabarets for the Adelaide and Sydney Fringe Festivals and Downstairs Belvoir Street, and workshop performances of a kids’ musical Alex in Videoland for Griffin Theatre and a musical The Golem of Prague for Flying Pig Theatre, Melbourne. He co-wrote two award-winning Film Australia-ABC TV documentaries The Forgotten Force (1994) and Return to Sandakan (1995). He wrote scripts and TV series proposals for Square Zero animation studios in London.
In 2017 he wrote a monologue A Life in Ten Meals for theatre project Breaking Bread and in 2018 his play The Man Who Became Santa was one of the three winners of Weatherboard Theatre Inc’s play competition and received a workshop and performed reading. His two adult historical fiction novels Palace of Tears (2015) and The Opal Dragonfly (2018) are published by Allen & Unwin with a third, City of Shadows, under contract to be published by A&U in 2020. His debut children’s novel The Phantasmic Detective Agency will be published by Eagle Books in 2020.