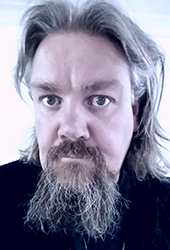 Cameron Hindrum lives, writes and works in Launceston. His novel The Blue Cathedral, inspired by formative years living in Queenstown and the Franklin Dam Blockade, was published by Forty South Books in 2011. He has also published two collections of poetry and since 2003 has coordinated the annual Tasmanian Poetry Festival. He has contributed several scripts to Mudlark Theatre's One Day Project, and his first full length play I Am A Lake was commissioned by Mudlark for the 2016 Unconformity Festival based in and around Queenstown on Tasmania's west coast and later toured Launceston, Burnie and Hobart to sellout shows. 101 was staged by Blue Cow Theatre in association with Three River Theatre in Launceston and Hobart during July and August 2019.