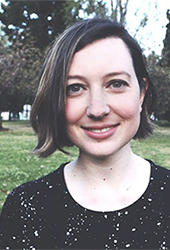 Seanna van Helten is a writer and theatre-maker based in Melbourne, Australia. Her award-winning and Green Room Award nominated company, She Said Theatre, was co-founded with Penny Harpham and has produced works in Melbourne, Brisbane, Sydney, Perth, Darwin, Adelaide, New Zealand, and in regional centres across Australia. Recent works include: Fallen (Sport for Jove Theatre Company/She Said Theatre); Salt (La Mama Theatre/She Said Theatre); HART, co-authored with Ian Michael (She Said Theatre); and Laika and Wills (Melbourne Fringe 2013). Seanna holds a Master of Writing for Performance from the Victorian College of the Arts. She is also a graduate of the University of Melbourne, where she received the Percival Serle Prize, and of the University of Queensland, where she received a University Medal. Seanna has also written for Griffith REVIEW, Voiceworks, Rave Magazine and Milk Bar Mag.