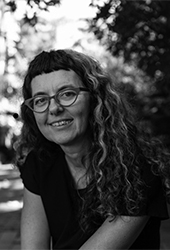 Andrea James is a Yorta Yorta/Gunnaikurnai woman and graduate of VCA. She was Artistic Director of Melbourne Workers’ Theatre 2001-2008 where she is best known for her play Yanagai! Yanagai! The play premiered at Playbox in 2004, was remounted in 2006, and toured the UK. Relocating to Sydney, Andrea was the Aboriginal Arts Development Officer at Blacktown Arts Centre 2010-2012 and Aboriginal Producer at Carriageworks from 2012-2016. She was a recipient of the British Council’s Accelerate Program for Aboriginal Arts Leaders in 2013 and was awarded the Arts NSW Aboriginal Arts Fellowship to write a play about Evonne Goolagong. Andrea performed in and co-wrote Bright World with Elise Hearst by Arthur Productions at Theatreworks, and directed her play Winyanboga Yurringa at Carriageworks and Geelong Performing Arts Centre in 2016 and was remounted at Belvoir in 2019. Her short play Blacktown Angels recently premiered at Sydney Festival for Urban Theatre Project's "Home Country".