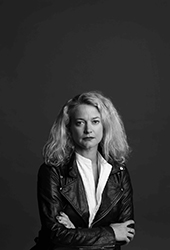 Sunny Grace is a writer, director and producer. She completed a Masters in Performance Writing at the National Institute of Dramatic Arts in Australia in 2016. Her screenplay, The Bower Girl, is currently in development and was long listed for the 2017 AWG Insite award. Her first stage play, The Angelica Complex, premiered at The Kings Cross Theatre in Sydney in 2016. She directed, produced and wrote her short film Trigger Happy in Dec 2017. She also produced the multi award winning short film dik (Winner Best Comedy Aspenshorts 2011, Winner Audience Choice Aspenshorts 2011, Winner Audience Choice LA Comedy Shorts 2011, Winner Audience Choice Palm Springs Shortsfest 2011, as well as many other awards world-wide). She worked as a theatrical agent for one of Australia’s most successful talent agencies, Barbara Leane and Associates. Her vision is to work with like-minded collaborators on telling original and compelling stories about our shared humanity while questioning the existing global power structures and their impact both personally and universally. In March 2019 she was awarded the Rex Cramphorn Artist in Residency at the University of Sydney with director Charley Sanders where they began developing a play currently in progress called The Company.