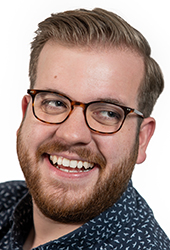 Jamie Hornsby is an award-winning playwright, actor, producer and content creator. He has been described in Stage Whispers as “a major voice in Australian playwriting” and The Barefoot Review as “one of the most promising young playwrights in the country today.” His play, because there was fire, was the inaugural commission from Jopuka Productions and won Best New Work at the Newcastle Fringe Awards before embarking on a national tour. It was recently published by Australian Plays. Jamie won the 2018 Flinders University Young Playwrights Award for his play, ASCEND, culminating in a week-long development and public reading with the State Theatre Company of South Australia, and he was recently selected as the runner up for the Australian Theatre Festival’s New Play Award for his play, Python, which will receive a creative development and staged reading in New York later this year. He was commissioned again by Jopuka Productions for 2019 to write Transcendence, a fantasy epic, and he served as a dramaturg on their group-devised production of ’bogan’. He has written for State Theatre Company South Australia and ActNow Theatre in their Decameron 2.0 project, and his writing appears on Season 2 of New Wave, an audio-theatre podcast.

Jamie was the inaugural Artist in Residence at Slingsby, alongside Ellen Graham, with whom he co-founded Madness of Two, a new theatre company focusing on tackling important issues through non-traditional methods. Madness of Two’s first piece, Dead Gorgeous: A True Crime Clown Show was programmed for development as part of the inaugural season of RUMPUS and premiered at the 2020 Adelaide Fringe, followed by Claire Della and the Moon, premiering in September 2020, directed by Shannon Rush. Their next collaboration, Starweaver, has been selected as part of the 2021 Adelaide Festival Centre inSPACE development program.