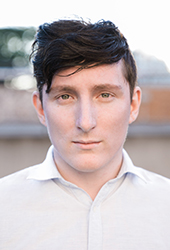 William Hinz is a Melbourne and Brisbane based playwright, lyricist and performer. In 2014 his first play, Allentown, premiered as part of Terra Nemo Theatre Company’s inaugural season at the La Boite rehearsal space. Since then, he has developed a breadth of repertoire across a wide range of styles. In 2015 he returned to work with Terra Nemo on his second play, Genesis, an exploration of our infinite fascination with the stars. In 2018, a revival of the work was listed as one of “the most exciting shows” of the Anywhere Theatre Festival and in 2019 it will be produced by A Very Theatre Company at the iconic Metro Arts, in addition to being studied by Queensland high school students as part of the state syllabus.

Hinz’s other works include, F*^% Off Geraldine!, a satirical examination of tall poppy syndrome, Remote, a collaborative contribution to Vena Cava Productions @realDonaldTrump, and Sincerely, Us an Australian musical dedicated to the lives of those who stayed on the homefront during WWI.

William is also an avid supporter of championing new Australian theatre, and in 2018 he founded the Scratch Night program at A Very Theatre Company, a collaborative platform dedicated to developing and raising the profile of new works in the Queensland independent theatre sector, while giving their creators a safe space to take bold creative risks in the process.