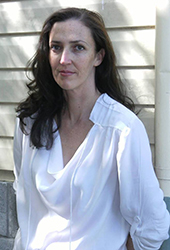 Elizabeth Tyson-Doneley is a Brisbane-based writer, artist and creative practitioner in theatre and film production. She was born in Tasmania, and has drawn inspiration from a childhood spent in various parts of Australia, in Mortlake in Victoria, Adelaide, Darwin, Hay and Sydney in New South Wales, Brisbane, Hervey Bay and Maryborough in Queensland.

She completed a Bachelor of Arts Degree at the University of Queensland in English and Drama in 1995. In 1993 she formed Kicking the Kettle Women’s Theatre Company with Leah Mercer and Leith Sinclair nee Whatmore, alongside Nicole Thibault and Gary Wilson as musical directors, and co-wrote, co-directed and performed in the shows Kicking the Kettle, Dinah is Dreaming, Kissing Eve and the Unisafe Project.

Elizabeth Tyson-Doneley completed a Bachelor of Film and Television Production at the Queensland College of Art, Griffith University in 2003, and worked as a production designer for various independent short and feature film projects in and around Brisbane. In 2010 her short play Dessert Pears was produced by Short and Sweet Theatre Festival in Brisbane and Sydney. She currently lives in Brisbane and works as an administrator at Griffith University.