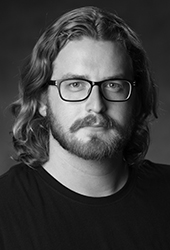 Alexander Lee-Rekers is a sound designer, writer and director. He is a graduate of AFTRS, University of Sydney and NIDA - where he completed his Masters in Writing for Performance. Alexander currently teaches at NIDA, as well as at the Australian Theatre for Young People where he is also under commission. He is drawn to concepts such as family, ambition, failure and legacy - how human nature can flit with ease between compassion and cruelty. He also writes children's television.