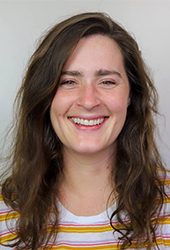 Hannah Malarski is a graduate of NIDA and The University of Tasmania. Hannah has written and directed short plays including Porn and Prawns (2010), and The Cortex (2010) and in 2012 dramaturged for After the End, by Dennis Kelly, at the Tap Gallery. Her play, The Midlands, premiered as part of Tasmania’s Theatre North’s 2013 season. Hannah wrote and performed one act play Bushpig, as part of the Adelaide, Melbourne, and Sydney Fringe Festivals in 2013. In 2015 she wrote, performed and produced The Jacobeans, a Premier selected play as part of Midsumma Festival. In 2019 she co-wrote and directed four part webseries HustlePuss for The Daughter's Collective. She is currently writing and producing video and screen work in Victoria.