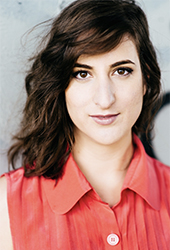 Jamaica Zuanetti is a Melbourne based writer.

She has a Bachelor of Arts (Hons) degree from The University of Melbourne. She is an acting graduate of the National Theatre Drama School. In 2015, she graduated with a Master of Writing for Performance from the Victorian College of the Arts, where she was the recipient of the Cassidy Bequest Scholarship.

Her play Too Ready Mirror was presented by Darebin Arts Speakeasy in 2017. In 2019, her second play Thigh Gap was shortlisted for London’s Platform Presents Playwright’s Prize. Her third play The World isn’t Made for Them was selected by NIDA Launchpad for development in 2018.

Jamaica is part of the 2020 MTC’s Women in Theatre Program.

She tutors in Creative Writing at The University of Melbourne.