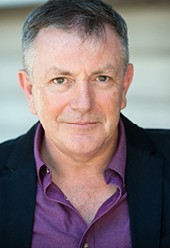 Originally from the UK, Mark has been acting professionally for almost 40 years. His first play Nothing won the 2011 National One Act Play competition and 2012 Dolphin Theatre, Auckland, One Act Play of the Year. His play, The Bench, won the Toowoomba Carnival of Flowers One Act Play competition in September 2013. He won again in 2014 with Circus which was also shortlisted for the Write Angles/Southend International Writers Festival in UK. Mark’s play Amanda premiered by Old Monk Productions at the Tap Gallery in May 2014 and was re-staged by New Theatre as part of the Sydney Fringe in the same year. Life after Pablo was staged by RGP Productions, in 2015, underneath the State Theatre. He wrote for subtlenuance’s 2014 project High Windows Low Doorways and the 2015 sequel And Now to Bed. In 2017 Brave New Word Theatre Co. premiered his piece Big Crow at the Actor’s Pulse in Sydney. We are the Himalayas was the second of his works to be premiered by Brave New Word, at New Blood Theatre in July 2019. This play was shortlisted for the Patrick White Playwriting Award, 2018. Most recently Mark’s play Water was staged at the New Blood Theatre by Where’s Harold? in November 2019.