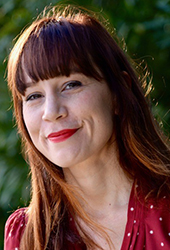 A graduate of the University of Sydney - BA (English and Performance Studies), Rebecca is a playwright and theatre maker.

Since 2007, she has been making shows that are steeped in atmosphere, which play with form, and engage with tragicomedy, subversive female voices and the experience of human intimacy.
“I know when Tracksuit Girl and Neil escaped at the end, and we were shoved, a bewildered audience into the hallways of the Austral, all we could do was look into each other's faces and laugh, and clap for our no longer present performers – connected through this brilliant, crazy thing we’d just gone through together.”
- Jane Howard, review of Tracksuit Girl, 2012

She has had her work performed at This Is Not Art (Newcastle), Performance Space’s Nighttime, Fraser Street Studio’s Uncoordinated, Metro Arts, Format Festival, Brisbane Festival, Queensland Theatre Company, Vitalstatistix and the Adelaide Fringe.

Her most recent work, developed with the support of Arts South Australia is Hits of the 70s, 80s and 90s. This show reimagines the mythology of Australian rock music through the 70s, 80s, and 90s from a female perspective.

In 2018, Rebecca presented If you can learn to fake authenticity you’ve got it made in the shop front window of FELTspace Gallery Adelaide - made with local artists Meg Wilson, Natalia Sledz and Hew Parham.

Following developments with inSPACE, Vitalstatistix and HotHouse Theatre, her show Drive was programmed for Theatre Works in June 2019 and has now been published by Australian Plays.

As a collaborator, Rebecca has worked with PlayLab’s Lab Rats, and on Future/Present (Adhocracy Residency, Vitalstatistix, 2014) and Second Hand Emotions (Adhocracy Residency, Vitalstatistix, 2017) with SJ Norman, Mish Grigor and Sarah Rodigari and in 2015 was awarded first prize in HotHouse Theatre’s Solo Monologue Competition for Last of the Corsetières.