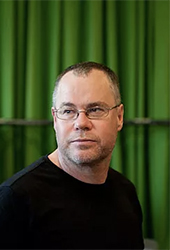 Paul is a writer and director, and the artistic director of subtlenuance, a Sydney-based company solely dedicated to the creation of new work.