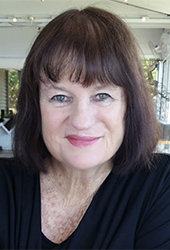 Kerry is an award winning Western Australian playwright and director, based in Fremantle. She likes to create contemporary plays which explore the connectivity that exits between one person and another. Shedding light on the human condition and the way in which characters reveal their humanity on stage is at the heart of Kerry’s creative vision.

Kerry was a finalist in the 2011 Maj Monologues Competition, winning the Australia Post People’s Choice Award for her comedic one man show, Handy Man. The play was also performed at the 2013 National Short and Sweet Festival in Sydney. Kerry was a finalist in the Festival, participating in the Gala Finals at the Seymour Centre. In 2012, her play, Birth, Death and Somewhere in Between was performed at the Edmonton International Fringe Theatre Festival in Canada.

She has also had her work included in the Summer Nights program at the Blue Room Theatre in Northbridge and Perth Fringe World productions. As a Fremantle resident, Kerry has embraced the opportunity to have her plays included in a number of annual Fremantle Festival productions. She is also interested in site- specific theatre where she wrote and directed a comedic play for the The Car Project. Audiences savoured the opportunity to be up-close and personal to the performers as they viewed the action unfold from the back seat of a car. After her play, Veneer was performed at The PS Arts Space in Fremantle and the Blue Room Theatre in Northbridge, the play was given a site specific context when it was performed at a local Men’s Shed in Fremantle.

In 2017 her play Heart Lines was included in the Subiaco Theatre Festival at the Subiaco Arts Centre after sold out seasons in 2016 Fringe World and at the Pakenham Street Arts Space (PSAS) as part of the 2015 Fremantle Festival. Kerry’s love of creating plays which explore the connectivity that exits between one person and another is demonstrated in Heart Lines where the play explores a rawest form of this connectivity – the undefined, perhaps spiritual, bond between a heart recipient and its donor.

Kerry's most recent play Whisper White premiered in Fremantle in September, 2019. Set on Australia Day, the play is a contemporary piece of theatre which gives audiences glimpses of Australia’s changing identity. After sold out audiences and great reviews, Whisper White is being performed in January 2020 at Perth Fringe World.