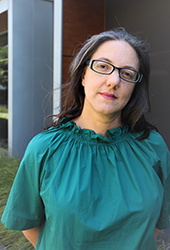 Daniela Giorgi is a writer and theatre producer. Her debut play, Talc, was produced in 2010. Her short play, Sicilian Biscotti, was produced for the launch of “Women Power and Culture” at New Theatre in 2011 and shortlisted for the Lane Cove Literary Award in 2015. Her second full length play, Friday, was produced by SITCO at the Old Fitzroy Theatre in 2013. The Poor Kitchen was produced in 2016 as part of the Old 505 Theatre’s Fresh Works Season and was published by Australian Plays in 2017. Its second staging was produced by Patina Productions at Limelight on Oxford Theatre in 2019. She co-wrote Shut Up And Drive with Paul Gilchrist and it was produced at KXT in 2016. Her most recent play Seed Bomb was produced as part of the Old 505 Theatre's Fresh Works Season in 2019. She’s had poetry and short stories published in "Prayers of a Secular World", Inkerman & Blunt; "Blue Crow Magazine", Blue Crow Press; "Knitting and other stories", Margaret River Press and Radio National’s "360 documentaries". She is the co-founder of indie theatre company subtlenuance and also blogs about food, place and time at sagesomethymes.com.