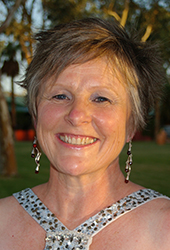 Veronica has had a long career in the health sector, working predominately in community health promotion for the Australian Federal, State and local Governments. She has considerable experience working in the community on arts and health development projects.

Apart from her nursing background, she has a Graduate Diploma in Community Arts Development which has underpinned her many community projects.
Some years ago, she was elected to her local council as a councillor, which gave her a greater insight into the workings of local government and all its foibles.

As a younger woman, Veronica trained in Melbourne in theatre practice, and has been part of performing arts, particularly in musical theatre.

She has an art studio where she currently paints and exhibits her work.

Veronica has been a writer for many years, and has had her poetry published in several national journals, including Studio. She has self-published a humorous travel book, All Go On The Gompa, about a failed miserable tour of India and Nepal. She is currently working on a children's book, Clown Boy.

Her play Holy Clappers: A Story of Folly and Stupidity is a reflection of all the characters she has met over the many years working with the community. The characters are found in so many situations, communities and volunteer groups. It is her first play.