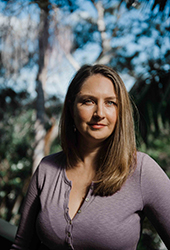 A graduate of the NIDA Playwright’s Studio, she won the Sydney Theatre Company Young Playwrights Award at the age of 18.

Joanna is a two-time winner of the Silver Gull Play Award for People Will Think You Don’t Love Me (2016) and Field of Vision (2019). She was shortlisted for the 2012 Philip Parsons Award (Belvoir) for K.I.J.E. (TRS, Old Fitzroy Theatre).

She is the founder and director of Storytellers Festival, a 2-week showcase and celebration of unproduced Australian writing, held annually at Kings Cross Theatre (KXT).

She was a core writer for Australian Theatre For Young People’s (atyp) Fresh Ink program and is a member of writers’ collective ISM. Joanna's plays have been staged at the Old Fitzroy Theatre, Griffin Theatre, KXT, atyp, NIDA, Old 505 Theatre, Slide Bar, Bondi Pavilion, and in hundreds of schools around Australia.

A former high school teacher, Joanna is also a highly experienced arts education manager and is the Head of Education at Bell Shakespeare. She is passionate about writing for, and working with, young audiences and has written for Bell Shakespeare, Camp Quality and Poetry In Action. Her popular monologue BOOT is performed by HSC Drama students each year. It was originally produced by atyp, published by Currency Press and commissioned for film, screening at film festivals internationally.