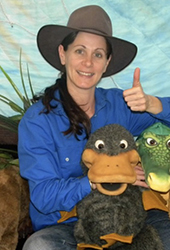 Richelle is a successful children's entertainer called Ricky Possum who has been performing her theatrical puppet shows to children across the country for 7 years. Working in partnership with Kathy Prosser of Possum Music she has written and recorded children's music. Possum Music has been the recipient of three Australian Songwriter's Association awards, including best Children's song in 2013 and 2014.

Richelle has written and directed two original plays for her local community, which include original Possum Music songs. She continues to encourage young people to participate in the performing arts and is committed to providing kids the opportunity to showcase their talents.

Richelle's passion for drama began at a young age with her talents being awarded at the outset. She knew she had a talent as a playwright when an original play she wrote in Year 12 was taken on tour to local primary schools. She is also an experienced musician having fronted several well established bands.