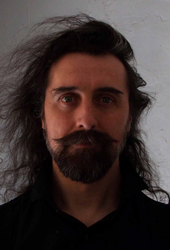 Paul McNally marks his theatrical beginning with the Sydney-based audience participation "cult" of The Rocky Horror Picture Show. At that time, he saw an inspired production of Beckett's Endgame and the most passionate Antigone he has ever seen. He has since kept a keen eye on theatre ranging from DIY experimental work to more formal productions of the classics. As The Surgical Sideshow, he has helped create a multitude of acts and plays with Herbert Peppard, culminating in The Surgical Sideshow Epic which has since been turned into a feature film. During that time, Paul operated lights and sound for purveyors of grand guignol, The Theatre of Blood and The Sydney Shakespeare Company. Since relocating to Tasmania, he has been involved in Hobart-based productions as an actor with PLoT Theatre Company and Directions Theatre. Astray is his first foray into the local scene and was performed with the same cast at two different festivals in 2019.