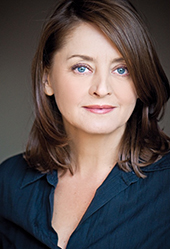 Jeanette's first play Tell Me Again, produced by Eye Of The Storm, premiered at The Old 505 Theatre in December 2014 and in July 2019 received a workshop and rehearsed reading at the Arcola Theatre in London. In February 2015, Jeanette co-devised with director, Peter Mountford, the one-woman show Queen Bette, about the life of screen legend Bette Davis, produced by G Bod Theatre for Mardi Gras 2015 at The Old 505 Theatre, with return seasons in March 2016 and February 2019 at The Old 505, October 2016 at The Hunter Valley Summer Theatre Festival and January 2020 at Gasworks Arts Park for Melbourne’s Midsumma Festival. Jeanette’s second play I Hate You My Mother, produced by Real Harpy and Whitebox, premiered at The Old Fitz in January 2017, and her third play I Love You Now premiered at The Eternity Playhouse for Darlinghurst Theatre Company in June 2017.

Jeanette has worked extensively as an actor in theatre, film and television and is a graduate of the National Institute of Dramatic Art (NIDA). Jeanette has participated in several Australian National Playwrights' Conferences as well as in many readings and development workshops for PLAYWRITING AUSTRALIA, PLAYWORKS, STC, GRIFFIN and others and has contributed significantly as both actor and dramaturg to many Australian premiered works. In 1996, Jeanette was awarded the inaugural Mike Walsh Fellowship.