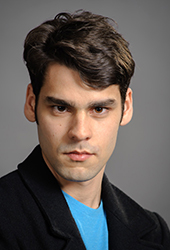 Liviu Monsted is a writer with over 9 years experience, starting out with short plays, he wrote and directed Temptation and its sequel Temptation: Aftermath for Fast and Fresh, both of which got to the gala finals.

His first play A Broken Law was written in 2011 and performed by the Australian Performing Arts High School (AIPAH) now (APGS).

In 2013 his second play Not A Word premiered at the Riverside Theatre having been featured as part of the Power House Youth Theatre’s new works showcase.

In 2016 his comedy Hiding Jekyll was published by EMU Scripts.

In subsequent years Liviu has written 8 plays, 6 of which have been produced by independent theatre company Mon Sans Productions. Plays include Passing Time, In Waiting and STREET.

In 2018 Liviu was commissioned to write Simmonds and Newcombe: The Deadly Run for Blancmange Productions as part of season 2 of Deadhouse: Tales of Sydney Morgue which premiered in November 2019.

Liviu is also often hired as a script doctor and manages the ongoing script development program "Script In Hand” where he has helped develop new Australian plays.

Currently Liviu is working as a script doctor and creative consultant for an upcoming TV show entitled Overdue Endeavor.