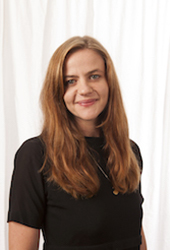 Bridget Mackey is an award-winning playwright, dramaturge and performance artist.

Her plays include Love/Chamberlain (Theatre Works, 2019), Kindness (Flight Festival, Theatre Works, 2015) and Hose (MKA, Theatre Works, 2012). She has co-devised and performed a number of works including Fools Gold (with Kerensa Diball and Romy Vager, Melbourne Fringe Festival, 2017) and Exit Everything (Dir. Fleur Kilpatrick, Melbourne Fringe Festival, 2015). She is currently developing a new work entitled The Exact Dimensions of Hell, a script that has been supported by the Melbourne Theatre Company (Cybec Electric Readings, 2016), and the Centre for Dramaturgy and Curation (creative development, 2019).

Since 2015, Bridget has worked with The Hunt - a multi-disciplinary group of artists who use sound, performance and imagery to create performance vignettes that draw on horror tropes in film, fashion and literature. Their project, Woman in Car, won the Melbourne Fringe Festival Liveworks Experimental Art Award (2017). In November 2018, The Hunt presented Quarry: The Hunt Conduct A Site Analysis at Trocadero Art Space as part of their guest curator program with Arie Rain Glorie.

She also works as a dramaturge, and is co-founder of Lonely Company, an initiative that provides peer support to playwrights. She has worked as a dramaturge with many writers: Fleur Kilpatrick, Georgie Harriss, Seanna Van Helten, Yuki Iwama, Jamaica Zuanetti, Tom Middleditch, and Ben Brooker.

Bridget studied acting at Flinders University and holds a Masters in Writing for Performance from the VCA. She has studied screenwriting at the University of Southern California (supported by the Dame Joan Sutherland Fund and the Ian Potter Cultural Trust). Through 2017, Bridget was lead artist with experimental theatre makers, THE RABBLE.