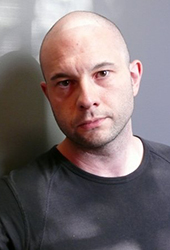 Robert Lewis is currently the Course Director of Creative Industries and Lecturer in Acting at Charles Sturt University. He previously lectured in the Theatre Program at the University of Tasmania (UTAS) from 2004 - 2016. He has studied theatre at UTAS, Honours at Monash University, Education at RMIT and Voice Studies at NIDA. His PhD focused on integrative practices and intercultural performance training aesthetics.

Robert recently completed a Certification in Integrative Studies at the One Voice Centre, New York. He is a director, writer, theatre maker and voice and movement teacher who trained with Cicely Berry, Frankie Armstrong, Rowena Balos, Mike Alfreds, OzFrank Theatre, as well as Butoh with Yoshito Ohno in Japan and is a Nobbs Suzuki Praxis member. Robert has published theatre performances and training films through Contemporary Arts Media (Artfilms) and has also published various academic articles on the subject of voice and movement integration.

He is the director of the performance group, Persona Collective, in which he directed and adapted productions including Iam Nocte (adapted from Seneca’s Oedipus), Profuge (adapted from Marlowe’s Doctor Faustus) and directed the site-specific performances Two Houses, Savages, Norm and Ahmed and Lines and Boxes.

Some of Robert’s other writing credits include Undercurrent, Orbiter/Lander, Undecim, Hoppy Young, Lines of Life, Resistance, Work of Mercy and most recently The Burning and Torn which were recently performed in Adelaide.

Robert is also the founder and director of the AusAct: Australian Actor Training Conference.