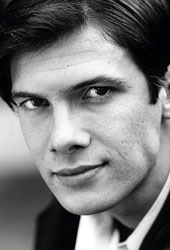 After a solid grounding in writing revue and stand-up comedy at university, Toby Schmitz wrote his first play, 'dreamalittledreamalittle', while studying acting at NIDA. It was presented as a director's project there in 1998 and was later restaged at Belvoir St. In 2002 Toby won the lion's share of the Patrick White Playwrights' Award with his play 'Lucky'. Toby's most recent play, 'Chicks Will Dig You', was performed as part of Company B's 2003 B Sharp season. Toby is currently collaborating with Brendan Cowell and Anthony Hayes on a 13-part television series, 'Men TV'. He is also developing a feature screenplay, 'right here right now', with Matthew Newton. He also works as an actor and director. In 2000, he directed a production of Howard Korder's 'A Boy's Life' at the Bondi Pavilion. Judy Davis directed his memorable performance in the STC's production of 'The School for Scandal' in 2001 and Robyn Nevin directed him in 'The Great Man' in 2000.