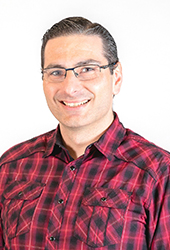 Chris has been involved many local amateur productions, including Boeing Boeing, The Diary of Anne Frank and The Masterson Dolls, plus several ten-minute play festivals. He successfully directed a major production of the thriller-comedy Deathtrap by Ira Levan in July 2018, boasting the best set design ever seen in Central Queensland. Nevertheless, Chris's greatest achievement to date is his very own play Everyone's Business, which had its stage debut during Mental Health Week in October 2019 with significant support from headspace Rockhampton. Inspired by elements of his own life and that of other people who impacted him personally, the script took four years to perfect. It underwent multiple workshops and rewrites, aiming to produce something real, historically accurate and uniquely powerful in modern Australia.

Undeniably, Chris is passionate about delivering quality theatre experiences that are memorable and fun for all involved—cast, crew and audiences—of all ages.