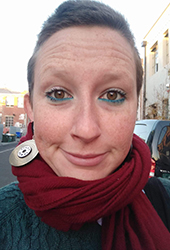 Liv Satchell is a theatre-maker, writer, dramaturg and facilitator trained at the VCA (Masters of Directing 2015) and the University of Sydney. Her current body of work The Grief Trilogy includes the plays I sat and waited but you were gone too long (La Mama Explorations 2016), my sister feather (La Mama Courthouse 2018) and let bleeding girls lie (scheduled for 2021 production). Her plays have been variously shortlisted for the Philip Parsons Fellowship for Emerging Playwrights, the Rodney Seaborn Playwrights Award, the Max Afford Playwrights Award, and the Queensland Premier's Drama Award. She was nominated for Best Director at the 2019 Green Room Awards for my sister feather. She is interested in how loss and grief are embodied, in feminine dramaturgies that seek value outside of traditional narrative paradigms, and in the possibilities of liveness in performance.