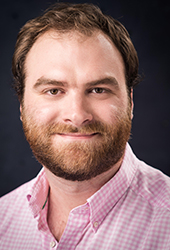 Eric is a playwright from Melbourne. His first full-length play, Bounty, premiered at the 2015 Melbourne Fringe, presented by Darebin Arts. He graduated from the Master of Writing for Performance at the Victorian College of the Arts (VCA) in 2017. Eric began his artistic career in student theatre at the University of Melbourne, co-writing and scoring productions for Union House Theatre. Previously he was an independent theatre producer, working in collaboration with companies such as Melbourne Theatre Company, Melbourne International Arts Festival, Don’t Look Away and Theatre Works, and a Creative Producer at the Emerging Writers Festival. Eric currently works at the Faculty of Fine Arts and Music at the University of Melbourne, home of the VCA and Melbourne Conservatorium of Music. His latest play, Prayer Machine, was scheduled to premiere at Red Stitch Actors Theatre in May 2020, but delayed due to COVID-19.