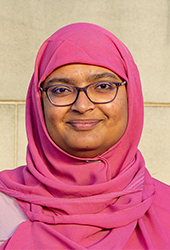 Tasnim is a Sydney-based playwright, director and dramaturg. In 2020, she presented her solo show, Boys Light Up, as part of The Blue Room’s Summer Nights program. Across 2017 and 2018, she performed in her solo work, Letters to John, at Crack Theatre Festival, Perth’s Fringe World and Batch Festival at Griffin Theatre.

She wrote The Wonderful, Terrible Hottie Avery for Shopfront’s Senior Ensemble and has written short work for Canberra Youth Theatre, Bondi Feast, Manchester’s 24/7 Theatre Festival and the Australian Theatre for Young People, including Ramadan Rocketship for ATYP at Home and Sweet in the Savoury for The Voices Project 2014: Bite Me.

In 2019, she was the assistant director on Banging Denmark for Sydney Theatre Company and The House at Boundary Road, Liverpool for Bontom at the Old 505 Theatre. She has directed readings for new works at festivals such as Siren Theatre Company’s Playlist and New Ghost’s Unfold Festival.

As a dramaturg, she has worked with Q Theatre, BMEC, Arts OutWest, CuriousWorks, Performance Space and Playwriting Australia on various projects with early-career writers.

Tasnim has been an STC and Contemporary Asian Australian Performance's Directors Initiative participant, a 2019 Griffin Theatre Studio Artist, a 2018 MTC’s Women in Theatre program participant, and the 2017 Resident Playwright at ATYP.

She was also a co-creator, co-writer and performer in Carpark Clubbing, a web series for ABC iView. She is currently serving on ATYP’s board and working on several new projects, including a commission with Penrith’s Q Theatre.