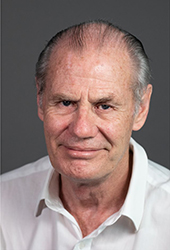 Tony Woollams has many years of experience as a producer, director, actor, writer, and teacher. Recent acting credits include the roles of Francis Nurse in The Crucible, Candy in CTGInc’s acclaimed production of Steinbeck’s classic Of Mice and Men– “one-handed Candy (a compelling Tony Woollams)” – Kate Strafford, On The Town, and the CTGInc’s successful production of Twelve Angry Men where “Tony Woollams as Juror#9 resonated with me” and in the LPAE production of Michael Gow’s Away in Casula Powerhouse where “Tony Woollams pulled off a difficult job directing and acting in the role of Gwen’s long-suffering but understanding husband Jim.” – Peter Novakovich, Stage Whispers.

His writing credits include Scenes for Young Actors, published by Currency Press, the plays Olive and Parramatta Reform Factory and Coming of Age and the adaption of Prince Caspian to stage. Tony currently teaches Entertainment, Drama, and English at the Granville South Creative and Performing Arts High School where he has guided and developed scripts for festival performances since 2006.

Tony Woollams has worked as a director around Sydney for a number of productions including Away, Daylight Saving, Money and Friends, Emerald City, The Lion, the Witch and the Wardrobe, Fossils, Hating Alison Ashley, Property of the Clan, A Midsummer Night’s Dream, Other Times and A Bedroom Farce to name a few.

He has worked in the Parade Theatre at NIDA, Qdos Arena, the Opera House, Phillip Street Theatre, Glen Street Theatre, the Riverside Theatre, Qantas Credit Union Arena, Campbelltown Arts Centre, the Seymour Centre, and Casula Powerhouse. Tony was the Artistic Director of the Northern Beaches Youtheatre for 15 years and currently is the President of the Liverpool Performing Arts Ensemble which continues to bring high-quality theatre to Sydney's southwest.