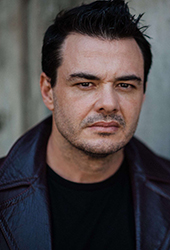 Peter made his debut as a professional playwright in 2020 with Breaking the Castle which had its world premiere at the Street Theatre in Canberra. Breaking the Castle was a one man show that he also performed in. Peter cut his teeth as a writer at the University of Queensland where he studied journalism. He has spent over a decade of his professional life in Theatre in Education working for both major theatre companies and through his own initiatives writing and devising plays with young people all over Australia. One of his projects, Cunnamulla Dreaming, written with the young people and community of Cunnamulla in South West QLD became the subject of a documentary on NITV.

His TV credits include All Saints, Young Lions, Terra Nova, Redfern Now, the Gods of Wheat Street, Secrets and Lies, Old School and The Secret Daughter. His Feature film credits include Danny Deckchair, Down Under Mystery Tour and Beauty and the Beast for American Sci-Fi Channel. Peter has also featured in a number of award-winning short films and won the Warner Brothers QLD New Filmmakers best actor award.