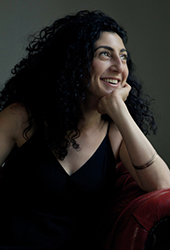 Aanisa Vylet is an artist from Western Sydney committed to telling new Australian CaLD stories that are entertaining vehicles for social change. She holds a Bachelor of Performance from the University of Western Sydney and was awarded the Ian Potter Cultural Grant in order to support her studies at the Jacques Lecoq School of Movement and Theatre in Paris and Barcelona (2011 – 2015). She has worked as an Australian actress and writer, with companies such as ABC, Foxtel, Matchbox Pictures, Sydney Theatre Company, Monkey Baa Theatre Company, Sport for Jove, Information Cultural Exchange to name a few. Her first short film, The Parisian screened at Flickerfest and various international film festivals. Her published works include: Private Research (The Voices Project 2013 – Currency Press) and On Western Sydney (Westside New Series). Her debut play, The Girl, was shortlisted for the Phillip Parsons Playwriting award. It toured to the Perth and Adelaide Fringe and received ‘five out of five’ star reviews and a nomination for the West Australian Arts Editor Award. Her first two plays were later performed in tandem as part of the National Theatre of Parramatta's 2018 main-stage season. Her most recent work Sauvage (Wild) was presented at Griffin Theatre Company for ‘Batch’ in 2019 and she was recently awarded a Create NSW Creative Development Fellowship where she hopes to continue to expand Australian cultural narratives on stage.