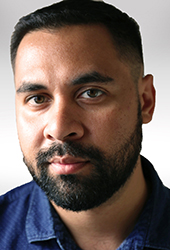 Bjorn Stewart is a Sydney based actor, writer and director who has worked across all mediums including theatre, television and online. Most notably he was a writer and actor in the Logie nominated series Black Comedy. He was a writer and actor on sketch series At Home Alone Together presented by Ray Martin. Other performing credits include KGB, Get Krack!n, Tonightly with Tom Ballard and Wham Bam Thank You Mam. Bjorn’s arts collective Cope ST also created sketches for The Slot produced for the Comedy Channel.

On stage, Bjorn has performed with Belvoir Theatre Company on productions, The Dark Room, Brother’s Wreck and Coranderrk. He has performed at Griffin Theatre in Thomas Murray and the Upside-Down River. Bjorn has also been a dramaturg for Moogahlin theatre company.

Behind the camera, Bjorn has written and directed 3 short films; Killer Native, I’m Gonna Make It and Last Drinks at Frida’s written by Kodie Bedford. His films have premiered at Sydney Film Festival and screened at film festivals across the world since including Flickerfest, Cinefest, and ImagineNative in Toronto