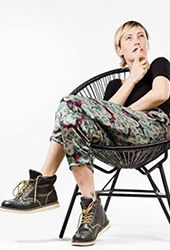 She works across art forms and is concerned with creating epic impossible ideas and trying to fulfill them, working with non-artists, the possibilities of liveness and destroying the white male patriarchy.

From 2010-2018 she was Artistic Director/ CEO of the artist-led experimental arts organisation Aphids, presenting work nationally and internationally. Currently she is a Creative Associate of the MONA FOMA Festival and an Honorary Fellow at the Micrososoft Centre for Social User Interface at the University of Melbourne.

Her trilogy of works Forever Now, Void Love and Yelling at Stars (2008-2015) explored the relationship between art and infinity by sending artworks into outer space. She is a recipient of the International Prize for Live Art (2015) for which she created Artefact, a funeral for obsolete technology (Anti Contemporary Art Festival, 2016).