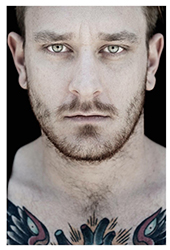 James Taylor is an award-winning playwright and musician living in Perth, Western Australia. After serving four years as a medic in the Royal Australian Navy, James left to seek his true calling, enrolling in Aboriginal Theatre at WAAPA and attaining his Certificate IV in 2014. It was here that James was introduced to the craft of writing for stage. The following year, James’ first original work, Hobo, was written. Hobo was performed at The Blue Room Theatre as a part of the 2016 Summer Nights program. After receiving a PWA script development, it showed again at The Blue Room for NAIDOC week and as a part of their regular season. Hobo received The Blue Room Theatre Judges Award for Outstanding Emerging Writer in 2016. Hobo was then accepted into Melbourne Fringe Festival. James then went on to study Contemporary Music at WAAPA, graduating in 2018. For the past two years, James has been releasing songs under his musical project Fever Dream, writing poetry and developing ideas for future plays. As a proud First Nations Yamatji man, James’ art focuses on issues surrounding identity within an Australian context. His biggest artistic influences include Louis Nowra, Wesley Enoch and Paul Dempsey.