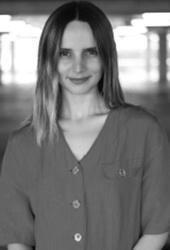 Gretel is a Sydney-based writer and graduate of NIDA's MFA in Writing for Performance. Her most recent credit is THE GREAT, staring Elle Fanning and Nicholas Hoult for HULU. Previous credits include Season 3 & 4 of DOCTOR DOCTOR for Easy Tiger and Channel Nine. She also wrote on the DOCTOR DOCTOR spin-off web series, WELCOME TO WHYHOPE.

Gretel’s playwriting credits include A PERIOD PIECE for The Old 505 Theatre, CARKING IT for NIDA’s 2018 season of student productions, THE BLOOD ON BLOODY BLOOD LADDER for ATYP at Griffin Theatre, and SHANDY’S CORNER for New Ghosts Theatre Company at King Cross Theatre in 2019. She was awarded the 2019 ATYP Co-commission for her play BATHORY BEGINS and was selected for ATYP’s National Studio and Fresh Ink Mentoring programs for 2017. Gretel was also shortlisted for ATYP's 2020 Rebel Wilson Comedy Commission.

Gretel’s master work screenplays, CARKING IT and ELSIE SHREW were long listed for AWG’s Primetime and Insite writing competitions. Gretel was one of the 2020 recipients of the Phillip Parsons Fellowship for Emerging Playwrights for which she is currently developing a new stage play. For the screen, Gretel currently has a feature film in development with Every Cloud Productions for Stan, and an original television series she is developing with Craig Anderson.