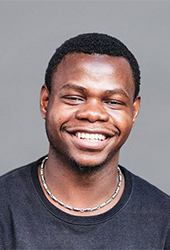 Future D. Fidel, 33, was born in Uvira in the Democratic Republic of Congo. After the death of the president Mobutu, the country descended into lawlessness that claimed the lives of his parents. Future was separated from his siblings, and when civil war struck in 1996, was forced to flee as an orphan stowaway to Tanzania. He tried desperately to trace his surviving family; he was finally reunited with his sister six years later. Future spent eight years in a camp before being accepted as a refugee in Australia, where he now lives with his brother, sister and nephews. Future is active in arts in Queensland, forming the Fimbo Boys in 2007 that performed African modern dance and music at various events, supporting young people from Refugee backgrounds. He also started projects working on making cultural films.

Future has now written his second play La Belle Epoque, an engaging masterpiece that tells the moderne history of the DRC and its relations with the West.