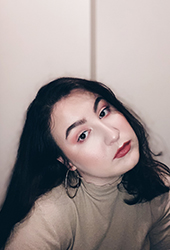 Isidora Pandilovska is a young Macedonian and South Australian playwright, director, and actor. Isidora lives in Mount Gambier, regional South Australia, and is passionate about creative writing, directing and all things film and theatre. Isidora’s work focuses on the complexities of growing up, gender, and global issues as well as the funny and good things in life. A notable achievement for Isidora has been co-writing Track and Field (performed at Wehl Street Theatre) with the mentorship of Dr Stephen Sewell, Head of Screenwriting, National Institute of Dramatic Arts (NIDA). Isidora has also been featured in Issue two of the Macedonian magazine Literary Elements. Other achievements include taking part in the Country Arts “Writing Place” program, as well as writing the monologue Abyss for the publication This Was Urgent Yesterday (Currency Press).